The cinematic moment which has haunted me the longest and hardest is a scene from a Tom & Jerry episode. Jerry - cheeks puffy with effort, eyes brimming with despair - is clasping his hands in supplication in front of Spike the Bulldog. Spike examines him for a moment and cheerfully trots away, with a parting “If you need me, just whistle!”

The episode is called “The Bodyguard” and its plot is simple. Jerry rescues Spike from the pound. To repay his debt, Spike promises to always protect the mouse from his tormentor Tom. “Just whistle,” Spike promises, “and I’ll come to your rescue.” All’s well for the little mouse, until Tom tricks him into chewing a piece of glue-covered gum which renders him unable to whistle. As he tries to flee the cat’s tortures, he bumps into Spike - and you already know what happens next.

How many times have I been Jerry? “Just whistle!” “Just ask!” “Just speak louder!” “Just call me up!” How many people told me to “just whistle,” blind to the glue sticking my lips together?

In my mind, Jerry’s glue-covered gum stands for every time I have found myself painfully, embarrassingly, unaccountably mute. The times teachers called on me and I could feel my knowledge evaporating. The parties spent hiding behind the host’s dog, baby, or glass of water. The high-school year when I lived in the library and could count the number of times I spoke to my classmates on one hand.

Some things in Tom & Jerry weren’t to be taken seriously. When Jerry placed Tom’s tail in a waffle maker, I knew to accept that the tail would expand to the size and shape of a real waffle without wondering about the precise mechanics. When Tom shrieked in pain, I knew to laugh rather than sympathize. Tom’s pain wasn’t real pain.

But I couldn’t, simply couldn’t believe that when Jerry fell to his knees and begged Spike for help, his pain was also unreal.

And if even I, who could watch Jerry hit over the head with an anvil without flinching, couldn’t ignore his pain here, how could Spike be oblivious to it? Weren’t Jerry’s pleading gestures as clear as the sound of a whistle? Wasn’t his anguished gaze just as piercing? Spike must have been either exceedingly stupid or willfully neglectful to act as he did.

In all of Tom & Jerry, this was the one scene that really strained credulity: Spike’s cheerful, cruel “Just whistle!” to a mouse in visibly acute pain.

At least Jerry knew what had happened: the cat literally got his tongue. I lacked even the consolation of a clear narrative. What was the glue which held my mouth shut? What did I swallow to stop me from whistling? I never did find out.

In my life, I met Spike after Spike after Spike. When I did, I experienced the same indignation as I’d felt on Jerry’s behalf. How could these people not see that I was suffering? “Just call me?” Don’t they know that phones are instruments of torture? Can’t they see the terror in my eyes? The indignations would pile up, fester, turn to grudges. Eventually, even mute Jerry would boil over and lash out at unsuspecting Spike. 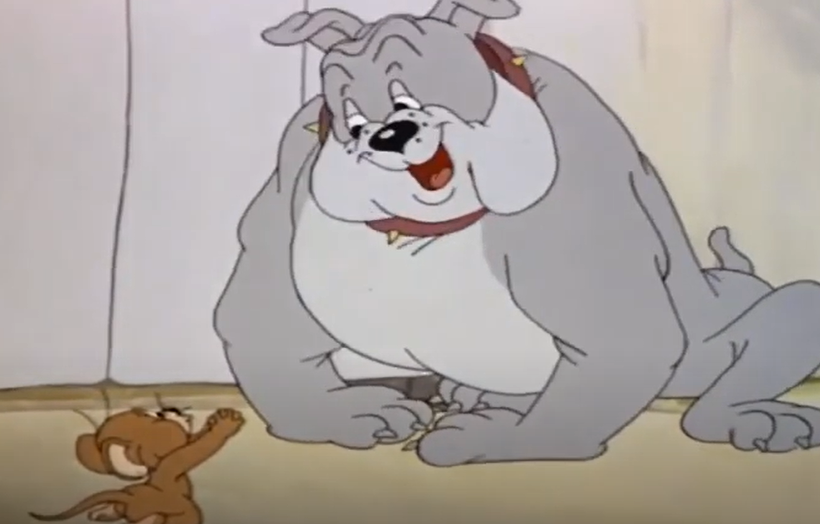 What I was lashing out against was Spike’s lack of empathy. It’s only now, after spitting out most of my own sticky gum, that I started to be able to see his side of the story.

When I watched Jerry mime his distress to Spike, I had just been following his plight. Thirty seconds earlier, I’d seen him swallow the telltale gum. His distress is plain for me to see. But if I were Spike - if I had never seen anyone swallow glue-coated bubble gum, let alone choked on the stuff myself - would Jerry’s anguish have been so visible to me? If your lips had never stuck together, if in your world nothing is easier than whistling, then Jerry’s despair really might look like pantomime.

When Jerry and I accuse Spike of a lack of empathy, we’re manifesting this very lack. We are assuming that his life experience has been so similar to ours that the hypothesis “Jerry can’t whistle” is as reasonable for him as it is for us. Spike thinks whistling is easy for Jerry; Jerry thinks reading facial expressions is easy for Spike. They’re both jumping to conclusions.

Empathy isn’t one thing. I may be more empathetic than average in one sense: noticing the emotions behind nonverbal cues.  But that doesn’t mean I know anything about the past experiences and stories behind these emotions. In that sense, I empathize with Jerry but not with Spike. I’ve been there; I know what his distress means.

Or maybe I don’t even know that much.  In his daily life, Jerry is a gregarious, fearless fellow. The glue-covered gum is an exogenous factor. And so he doesn’t hold a grudge against Spike. He’s frustrated that he can’t communicate, but not angry. He isn’t like me at all.

I hope I can learn that from him.

When Spike said “Just whistle,” he wasn’t wrong. It might not have been as easy as he supposed, but what enabled Jerry to whistle again was continuing to try – to try so hard that he turned red in the face and spat out the sticky gum. Even if “just” feels like an insult, the solution to social anxiety is doing the the thing you’re afraid of.

In one place or another, we’re all covered with glue. What is easy for you is hard for me – and vice versa. Whether you’re Spike or Jerry, I hope you’ll remember that.

I watch “The Bodyguard” again today. For the first time in my life, I notice Spike’s consternation in the face of Jerry’s bizarre series of gestures. For the first time, I see the tenderness in his eyes as he pats Jerry on the head and quips: “Baby talk! Ain’t he cute?”

For the first time, I laugh.

Of all of Tom & Jerry’s lessons, the most profound is this: it’s just a funny story.